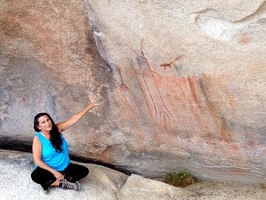 My New Mythos writings—integrating theory and practice in a transdisciplinary paradigm—engage the imaginal, mythopoetic cosmologies of Renaissance Neoplatonism and natural magic with depth and archetypal psychology, claiming The Red Book: Liber Novus as Jungian Natural MagicTM: a literary shamanic art-form.

The De Magia demonstrates that the Florentine natural magicians’ prisca theologia is this transdisciplinary literary practice, which integrates philosophical, mathematical, psychological, and spiritual theory in an imaginal mythopoesis. It embodies this literary art-form through: mythological beings such as Pan and Venus; imaginal cosmologies such as the astrological zodiac and the Dionysian celestial hierarchy; and archetypal constructs such as Plato's the One, the Pythagorean binary, and the Christian Trinity.

C.G. Jung’s Red Book encapsulates this archetypal tradition in an imaginal mythopoesis that transcends into humankind’s shamanic past, and bears up through symbol and story our lived archetypes. Beginning in the deep interior of the anima mundi, with archetypal images or ideas, Jung follows the images as they become fully-fleshed in archetypal personifications or characters, then travels with these figures as they interact with each other on all levels of nature, bringing him with them in return to a greater spiritual wholeness.

Jung’s technique of active imagination employed in creating The Red Book parallels Lefèvre’s natural magic technique of numerical ascension through number mysticism, since both are rooted in our common ancestral past of shamanism through an archetypal gnosis. Through a shamanic practice that mirrors the technique of constraint in Patanjali’s Yoga-sutras, Lefèvre and Jung follow ideas through images back to their source in the transcendent. These ideas universal to humankind are often expressed as geometric images. In literary forms of this magical practice of philosophical theory, Plato’s forms are adorned with the mythopoetic stories that are received through muse.

These mythopoetic treatises belong to a literary tradition that includes Judaism’s Bahir, one of the Kabbalistic precursors of Lefèvre’s De Magia. Moshe Idel ascribes a term to Kabbalistic writings such as The Bahir that applies to both Lefèvre’s and Jung's texts: “whole divine pleroma.” Albeit in English translation, this term from The  Bahir is clearly correlative with Jung's terms “whole pleroma” and “system of the whole world.” Through their mythopoetic dream-vision texts, Jung and Lefèvre both arrive at this greater spiritual wholeness. Writing in this literary shamanic art-form manifested and enacted the process of self-transformation. Reading and teaching this art-form has the same awesome effect. These are not imaginary stories, but imaginal, archetypal myths that have the power to transform human beings, and nature—the anima mundi itself. When a patient or student under our tutelage present with these universal archetypal images, these visions, our work is to guide them safely through that awesome but perilous journey. This is a vision quest universal to humankind, which should be revered as the process of spiritual revelation or enlightenment.

The essential element in both the De Magia and The Red Book that grounds them in natural magic, is their engagement with soul, the anima mundi, at every level of  humankind's life on earth. Jung's mythopoetic journey through The Red Book brings him into a spiritual wholeness described as "the whole pleroma," just as Lefèvre’s mythopoetic journey through the De Magia brings him into a spiritual unity that is manifest on all levels of nature. The anima mundi, soul of-and-in the world, is nature as it manifests in each living moment. Ours is the mythopoetic path of reading the book of nature, of active imagination whereby the anima mundi presents itself as nature, a unity which we participate in co-creating. These treatises are literary manifestations of a specific lived spiritual experience, known as isolation in the Hindu tradition, divine Unity in Renaissance natural magic, and individuation in Jungian traditions. It is essential that teachers who have journeyed this vision quest guide patients and students.

Like the Florentine dialogue of De Magia naturali, The Red Book transmits humankind’s prisca theologia or perennial philosophy, via this transdisciplinary, literary theory and practice itself, designed to guide the student on a transformative journey of reintegration with psyche or soul. Not a religion, then or now, ours is a lived secular spirituality grounded on earth.

Renaissance Neoplatonism and natural magic, and depth and archetypal psychology unify opposites--esoteric and exoteric, ineffable and effable, transcendent and manifest--through a wholly interpenetrating exegesis whereby the literal and spiritual realms are unified within life on earth: in the anima mundi, nature.